In the mid-1880s William Walter Van Ness built a large three-story hall. It functioned as a boarding house and included apartments for faculty and staff. After his death the house passed to his wife, Mary Waters Van Ness. She was quite a recluse but occasionally came out and walked down the street with her feet wrapped in tow sacks and carrying a Sewanee lantern, a staff, and wearing a long black veil. She was called the “Witch of Endor” by the students. During this time the house was run by Mrs. Emma Blanton Tucker. After Mrs. Tucker’s death in 1909, her daughter Miss Johnnie Tucker managed the boarding house.

The Van Ness family owned the boarding house for over half a century, but in the wake of the Depression the University purchased the building. They divided it into apartments for married students. In 1963 the boarding house was torn down to make way for the duPont library. 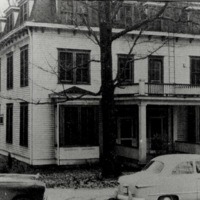