The Bonholzer house is on Morgan’s Steep Rd., about halfway between Hodgson Hall and the Steep. It was used as a directional reference with its original name; “out toward the Swiss Cottage” or “on the road to the Swiss Cottage.” Built originally on the large lease of Vice-Chancellor Hodgson, the cottage became a part of the lease of the Bonholzer family when that tract was split from the Hodgson lease. John Bonholzer was a Swiss from the Gruetli Colony. It was said that he had the best farm on the Mountain. He sold vegetable and dairy products long before the University Dairy. The best tomatoes in Sewanee came from the garden at this house. The Swiss Bonholzer was not the only reason for the cottage’s original name. When the cottage was first built there was a balcony on the upper story which hung out over the lower story, reminiscent of a Swiss home. The Bonholzers then added the present porch and the house became Swiss in name only. A large barn was constructed behind the house, but it was torn down in the 1990s.

During World War II the house was used briefly by the Castleberrys and then relinquished back to the Bonholzers until 1958. In recent years the house has been owned notably by Marcus and Ann Oliver (1972-2007) and since 2011 is in the possession of Allen Reddick.

Gerald L. Smith and Sean T. Suarez, Sewanee Places; A Historical Gazetteer of the Domain and the Sewanee Area p. 197 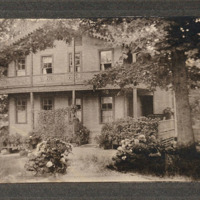