This house was built by Mr. Hayes for Mrs. M.R. DeSaussure. She came to Sewanee to educate her four sons. There were four DeSaussures in the Grammar School in 1873 but only one of them went on to the University. In 1874 Dr. George T. Wilmer came to teach and owned the house until he left in 1887. He taught metaphysics, political science, history, and commercial law and banking. In 1877, the lease was taken by M.J. Carruthers and after that again by Mr. Hayes.

In 1888, Dr. Cameron Piggott bought the house and lived there for more than 20 years. During his ownership the house became the first building on the plateau to have running water. Piggott, a graduate of Johns Hopkins, taught chemistry, geology, and mineralogy at the University. However, he was best remembered as a dedicated doctor. He delivered all the babies, came to houses on call, and sat up and stayed with the dying. For many years he served as the health officer. Piggott was also famous for being the only person who had fallen 60 feet off Clara's Point and lived to tell the tale. He died in 1911. In 1926, Cotesworth Pickney bought the house for his brother-in-law, Bishop Craik Morris, to use when he retired. However, Mrs. Morris did not want to live here so they sold it to John Luke in 1929. Luke, a major in World War I, was ordained a clergyman in 1924. He used the house as a summer home and kept it until his death in 1951. Mrs. Luke stayed in it for some years after his death. She sold part of the lot with a small chapel to John Hodges. Dr. and Mrs. Keppler bought the house in September 1956, and lived there until around 2010. The house is currently owned by Martin and Marion Knoll. 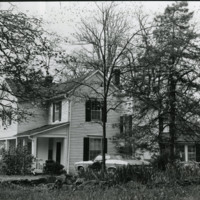