Rev. Arthur Gray’s residence was located east of the Sigma Alpha Epsilon fraternity in the Alabama-Mississippi Ave. area. In 1911, Gray gave his home to the University for use as the vice-chancellor’s residence. The University sold it to Bishop Albion Knight, who would become vice-chancellor in 1914. Vice-Chancellor Knight led the University during the trying times of World War I and its effects. However, the Bishop made at least three significant contributions to the University: he paid off an accumulated debt of $300,000; launched and substantially completely a drive for a $1,000,000 endowment; and greatly improved the physical plant. Knight also oversaw the construction of Sewanee staples such as Convocation Hall and Elliot Hall, and brought electricity to the mountain. Vice-Chancellor Knight lived in the Gray mansion until it burned in 1921.

Despite the loss of the house, a few good anecdotes came out of this fire. While the house was burning Dr. John Nottingham Ware, professor of French, rushed over to help. He had heard there were valuable papers in the attic. Resourcefully, and at great danger, he made his way to the master bedroom where there was a trap door to the attic. However, with no ladder it appeared hopeless until he thought of bouncing on the bed, trampoline style. He made a couple of good jumps when Mrs. Knight called out, “John Ware, get your dirty feet off my bed.” Another story is that the students knew Bishop Knight had a supply of wine in his cellar. The more energetic of them were able to salvage the entire contents of the wine cellar, though some of his fine books were lost to the flames. It was reported that not all of the wine found its way back to the Bishop after the fire. 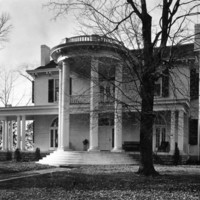