Symbolically, this house is one of the most important of Sewanee’s early buildings. The building was named for the Rev. Francis Tremlett, an English clergyman, who hosted and assisted Bishop Quintard on his trip to England in 1867 to raise money to open the University. With the funds raised on that trip, Bishop Quintard was able to construct this building—the first boardinghouse for students at University Place. Built on the site of Mrs. Gass’ house, Tremlett Hall was a small dormitory holding 42 students. Constructed in the summer of 1868 at Rowe (Polk) spring—the spring itself was also renamed Tremlett Spring in honor of the Rev. Tremlett. The hall was described as a sturdy, blockish building of massed plan and two stories tall. In 1870, a four-room and a two-room cottage added to the yard.

In 1897, Tremlett was remodeled and opened as a boarding house for the medical students. The charge for board was 12 dollars per month. It functioned for two seasons. Tremlett Hall was for many years the domain of Miss Fannie M. Preston, the most famous of all Sewanee's matrons. She was known for her regal and quiet demeanor. She left Tremlett to look after old Hoffman when it was built in 1899. Tremlett Hall was razed in 1916 by the University. 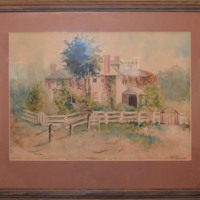