This house was approximately on the site of the Sewanee Military Academy Gymnasium. It was built for Mrs. Helen Coley, an English woman, as a summer home. Later, the balcony on the side was extended, with lattice, to the second floor. Mrs. Coley is shown standing on the balcony. Below is her oldest grandson, Harry Easter. The other two grandsons, Charles and Frederic Easter, are in the second floor window. Her granddaughter, Ellen (Nellie), is in the little cart with her Negro nurse beside her. The Reverend John Augustus Harris married Nellie Easter in 1886. He was an alumnus of the College, and St. Luke's in 1885. His son was the Reverend Edward B. Harris and the latter's son was Edward B. Harris, Jr. The Reverend Harry Easter grew up in Sewanee, went to the College, and was rector of Otey Parish. He knew more than anybody about early Sewanee and he wrote a paper, Pre-historic Sewanee, for the E. Q. B. Club (See Purple Sewanee, pages 7-8, 44-45.)

After Mrs. Coley’s death in 1887, the house was bought by Robert Colmore. This was one of the various houses he lived in before buying the Guthrie House on North Carolina Avenue in 1905. Various families occupied this house after Mr. Colmore. Mrs. Ivy Perrin Gass and her family lived there when she was matron at SMA in 1899 until she married Bishop Theodore DuBose Bratton, who presided over Missisippi and was ninth chancellor of the University. The house was finally pulled down when the Sewanee Military Academy swimming pool was built. 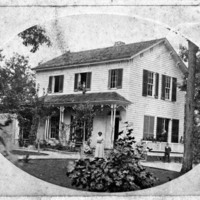