The oldest part of the Chitty house was built by Bishop Quintard in the 1880s for his son, George, Located on the end of his lot on South Carolina Ave., the house incorporates a small log cabin alleged to be the only surviving antebellum structure in the center of campus. Part of this cabin, an end wall showing crude v-notches cut into smallish logs, is visible to the left of the main house. Before becoming part of the Quintard house in 1880, the cabin was the residence of an elderly African American woman, who was a dependent of Bishop Quintard. Today the house greatly exceeds the original cabin.

Major MacKellar (“Major Mac”) lived in this house for many years. He was Vice-Chancellor Hall's brother-in-law and taught at the Sewanee Military Academy and the University until his death. Arthur and Elizabeth (“Betty”) Chitty then lived here for over 50 years (1948-2002). They hosted multiple students in the spacious house. Arthur Chitty was a notable historiographer of Sewanee. The Chitty House has been owned by Marcia Mary Cook since 2004.

Gerald L. Smith and Sean T. Suarez, Sewanee Places; A Historical Gazetteer of the Domain and the Sewanee Area p. 197 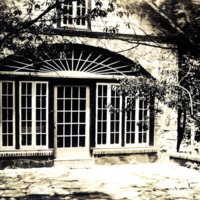