Cravens-Watkins House, affectionately known as “Arcadia,” first belonged to Miss Sallie Milhado. Originally from Norfolk, Virginia, Miss Sallie operated Arcadia as a boardinghouse. It was also where she raised her sister’s children—who called her “Lallie Miladdie.” She was described as unique, and remembered for her mint juleps, squirrel tail hat, fear of thunderstorms, and her horse Maud. One day when Miss Sallie was riding with Miss Mooney in a carriage drawn by Maud, a thunderstorm developed. In Miss Sallie’s rush to reach safety at home, Miss Mooney fell out and was left by the roadside. Another story about Miss Sallie involved President Woodrow Wilson. One of her boarders, Cary Grayson, arranged for her to meet the President while she was in Washington, DC. Although Grayson cautioned her to be dignified, it is reported that when ushered in, Miss Sallie clapped the President on the back and said, “I’m glad to see you, old top!”

Duval and Florence Cravens and their family were the next residents of Arcadia. Duval Cravens was superintendent of the Sewanee Military Academy and had previously lived in seven different houses across the Mountain. Florence Cravens had a talent for gardening and playing hostess so settling in Arcadia was a dream come true as her daughter recalled:

“The greatest day was when Mother and Dad bought Arcadia. Everyone else thought that they had lost their minds (possibly even Dad). The house had belonged to Miss Sallie Milhado, and as children we had spent time with her. She rode horseback sidesaddle, smoked, and she also killed rattlesnakes. During storms however she would hide in a closet or under a bed, taking us with her. When we moved to Arcadia, Mother was finally happy with the size of her dining room. Some of our most vivid memories are of the dinner parties that our parents had for friends, both on and off the Mountain. Like all the ladies in Sewanee, she entertained visiting parents, trustees, and regents.” – Virginia “Sis” Cravens Ravenel Paine

After Mrs. Cravens’ death in 1978, the Watkins family owned the house until 2016 when an Episcopal priest purchased it. 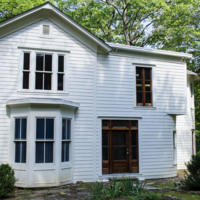