Susan Dabney Smedes built this cottage in 1894. It was named for her admirer and promoter, British Prime Minister William E. Gladstone, who sponsored the publication of Smedes’ book, Memorials of a Southern Planter, in England. A biography of her father, the book was received with almost superlative expressions from the press. It was valued not only as a mirror of life before and during the “war between the States”, but as a valuable addition to the history of the Reconstruction period as well, of which so little had been written. The book had been only meant for her father’s grandchildren, but her brother Virginus, a fellow writer who also tried to capture their father on the page, urged her to give the book to the world. Gladstone had been the one to take Southern Planter overseas (another supporter being Queen Victoria herself). He was reputed to have said, “Let no man say, with this book before him, that the age of chivalry is gone, or that Thomas Dabney was not worthy to sit beside Sir Percival at the round table of King Arthur”.

After her novel’s success Susan, who had been a widow since 1890, felt the need of a permanent home among her own kind and was advised by one of her sisters to move to Sewanee. Relying on her father’s meager plantation money and her friendship with Bishop Quintard and Miss Lily Green alone, Susan and her other sister Lelia rented a house up on the hill and hosted student boarders. When the school shifted to student dormitories in 1894 the ladies decided to build. They chose the present site of the Gladstone cottage because it was secluded. When they cleared for the building of the cottage, they left nine special silver maple trees, named for the nine surviving brothers and sisters. It was said that as each one passed on, the tree that bore his or her name also died, except for Lelia and Sarah, which stood side by side as the sisters stood in life. Bishop Quintard was a frequent visitor to the cottage and often came unannounced. Sometimes he came to plant in their garden, other times he brought distinguished visitors to meet the ladies. Susan built a house next door to Gladstone Cottage in which she held classes, the children Sewanee coming to her for daily instruction. Susan lived at Gladstone until her death in 1913. Her charm, wit, and gracious hospitality to the families of Sewanee and distinguished visitors to the Mountain greatly enriched the Sewanee community. Portraits of Susan and William Gladstone have been handed down to each owner of Gladstone, as well as Burleigh (the plantation) dining room furniture. In 1928 the cottage was bought by Bishop William George McDowell. At the time he was Bishop of Alabama. The house is currently owned by Craig and Carol Stubblebine. 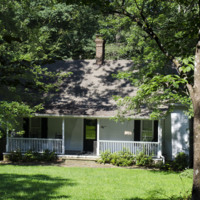