In 1868 Mrs. Sarah E. Cotten, a relative of Major Fairbanks, took a lease and built this large frame house to run as a boarding house on the site of the present Tuckaway Inn. She had originally come in 1867 to Sewanee to run Otey Hall. The house was called the Cotten House for many years, long after Mrs. Cotten had moved away. It was taken as an annex to the Hotel in 1883. Mrs. Stuart from New Orleans who was Dr. William Norman Guthrie's mother-in-law, had a dancing class there in the dining room. "Miss Queenie" Washington said she went to it as a small girl and Kirby Smith, John Hodgson, Pem Finley, Charlie Holland, Willie Garnett and Gus Boucher were some of the boys. Major Fairbanks bought it later and owned it and the cottage. Dr. Corley also had his dentist's office there at one time and rooms were rented to various people until Miss Johnnie Tucker bought it in 1913. Its name was changed then to Tuckaway for her. In 1926, while Miss Johnnie was on a trip to New York and Miss Dora and Eva Colmore were looking after Tuckaway for her, the house caught fire. It had been a big dance weekend and a girl had left the electric iron on! It was reported to be one of the most exciting Sewanee fires as students in dress suits tried to rescue the furniture before it burnt to the ground.

The little white cottage in the yard was built by Mrs. Cotten for her daughter, Mrs. Houston. Major Fairbanks turned it over to Miss Flora Fairbanks and her friend, Miss Llewellyn, who lived there several years. Miss Tucker was forced into retirement at the prime of life, about seventy, by blindness and moved into the cottage. Nicknamed Little Tuckaway, it became a Mecca for returning alumni. At one magic moment, to relieve overcrowding on library walls, the oil portrait of a Sewanee bishop was hung over the fireplace of her dormitory. From Miss Johnnie’s cottage, with its mementoes of Sewanee’s past, came the imperious command, “Take that portrait down!” It came down. No one knew or asked, why. Miss Johnnie is alleged to have expelled one hapless student by the simple expedient of packing his trunk and having it moved to the yard. It was pulled down after the big house was burnt. 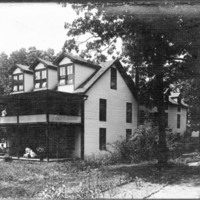