The Sewanee News said in June 1873, Mr. Hoge had erected “a neat and tasteful cottage on rising ground west of the village." Mr. Samuel C. Hoge was a Postmaster and also had a store in the village. He died in 1902. The lease was still owned by Nannie and Nellie Hoge in 1922, and Mr. W.L. Myers bought it in 1923. The Myers family still owns it. The house has been encased in stone and looks very modern now.

Ina Mae Myers said that her "grandparents, William Lawrence and Elizabeth McBride Myers, bought the Hoge House in 1923. My grandfather died in 1926, and my "grandmother continued to live there until her death in 1940. We moved into the house in 1942. There were two wooden houses, and a barn, on the lot. One house had only two rooms, which were rented to students. The other contained eight rooms. It was heated with grates. There was a wood burning cook stove and a well on the back porch. There were no closets and no bathroom. It was pretty primitive" 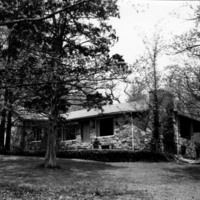