This house stood where the west wing of Gailor Hall is now. It was built by Dr. Richardson on the lease in his wife's name, Sally Richardson. Dr. Richardson was a pharmacist and was called doctor by everybody. He ran a soft drink shop in part of his house and would keep it open at night after dances. It was very popular with the students despite a rumor he had fished a kitten out of the oyster stew one night. Ely Green’s mother worked for the Richardsons and lived in the back of the house, as Green wrote about in his book, Ely: too Black, Too White.

The house was next bought by Frank Lautzenheiser, a Swiss from Guetli. He was employed by the University and noted for the tubs of blue morning glories he planted on the campus. In 1917, Mrs. Florence Alexander Brown purchased the house when she and her daughter, Florence Lewis, came to Sewanee. They lived here until they bought Mrs. Cotten's house in 1922. Mrs. Fannie Kirby-Smith Wade bought the house in 1922 and owned it until her death. It then was purchased by the University and razed in 1953 when Gailor Hall was built. 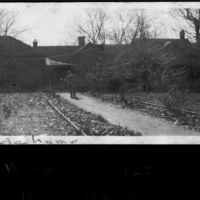