Built by a family who had returned from France, this house was known for its elegant appearance and gilded chairs. Unfortunately, the name of this original family is unknown. In 1909, Benjamin L. Coulson purchased the home. Following the death of the next owner, Mrs. Emma Scott Dewey, the house passed to her children, Chauncey Dewey and Emma Dewey (later Mrs. Emma Dewey Lockwood). In 1923 the house was bought by George Washington Ely Atkins for his son, Reverend John Norton Atkins, and his family. The elder Atkins kept a suite with two south bedrooms, bath, and connecting closet for himself. Reverend Atkins was the Superintendent and Chaplain at Emerald-Hodgson Hospital. He had four children. Sometime prior to April 1932, Major General William Ruthven Smith, then Superintendent of the US Military Academy at West Point, visited the Atkins’ to inquire about the house. He wanted to retire there as Superintendent of the Sewanee Military Academy. Despite the Atkins’ disapproval, incoming Vice Chancellor Guerry granted Smith’s wish when Reverend Atkins resigned from Emerald-Hodgson in 1938. General Smith supposedly lived there until his death in 1941.

Allen Tate was another notable owner. Mr. Tate, editor of the Sewanee Review, lived here with his then-wife, Caroline Gordon and their daughter Nancy Tate (Wood). It is speculated they lived in the house for about four years before their tempestuous marriage ???. However, during their time there Nancy Tate met her husband, Percy Wood, a student at Sewanee. A portrait of Caroline Gordon sits in the living room of the house. After the Tate years, many more families occupied the home, but for no longer than two years. The arrival of the Camps broke this spell, they lived in the house for 25 years. David Camp was a chemistry professor and eventually chair of the department. The Camps implemented many projects at the house. They built a stable for Mrs. Camp’s horses, constructed a goldfish pond that still exists, and planted several fruit trees. The Camps used the basement to store the vegetables from their land at Lake Cheston. David Camp would drink a quart of home canned tomato juice every day and put the extra vegetables on the front porch for anyone passing by. When the current owners purchased the house, they found the Camps’ jars of vegetables still intact on the back basement shelves. In the mid-90s the Bordleys bought the house. Mr. Bordley had his eye on the property the very day the Camps bought it. Mrs. Camp thought of it as a happy house and wanted the Bordleys to have it once she and her husband moved.

Virginia and Chip Craighill, the current residents, purchased the house from the Thoni’s in 2002. 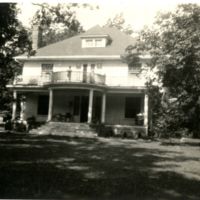