"This cottage was built on a location south of the Chapel. Dr. DuBose was made Chaplain the summer of 1871. He spent the rest of the year rounding up students in South Carolina dn bringing them back with him to Sewanee. In March, 1872, he built the Rectory and a large boarding house next door for his sister-in-law to run.

He was Chaplain for eleven years, and the "Rectory" was a center for the students, especially the ones from South Carolina. "Ice cream, games, and fireside conversations were the attractions." The Choir dance was held in the big west dining room. New students stayed there until they could be placed. Sick students were often moved there, and musical ones often used the piano,

The Rev. William A. Guerry became Chaplain in 1893, and he and his family lived in the Rectory until he became Bihsop Coadjustor of South Caolina in 1907. Alexander Guerry, his son and later Vice-Chancellor of the University, grew up there.

Dr. DuBose helped found Fairmount School at Monteagle in 1893 and married one of its principals as his second wife. His two daughters later ran the school and continued to use this house during their summer vacation renting it to various people the rest of the year. After their retirement they lived in the DuBose Rectory he year rund until it burned in November, 1939." 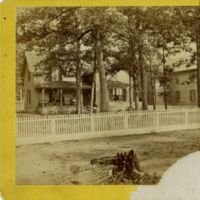