Bishop Wilmer had the first lease on this lot which ran from University Avenue where Cleveland Hall is, to Oklahoma Avenue. Apparently, he never built on it. In 1872 Mr. Hayes built the house for Dr. H.M. Anderson of Rome, Georgia, who had married Mrs. Quintard's sister and was the Treasurer of the University in 1869 and the first Health Officer. He had been a Trustee.

It was said that he would sharpen his pen knife on his shoe and then open a boil with it. He and his family lived here for a good many years. One of his daughters, Mrs. King, was matron for many years in the time of Mrs. Preston. Dr. Anderson resigned in 1876 and the lease was in the name of his wife, Mrs. Julia Anderson, in 1878. But they must have kept it as a summer home.

After the Andersons left, the house was rented to various people for a few years and then in 1895 it was bought by Dr. Barton and he and his family lived in it until his death in 1926...

After that it was rented again to various people but was standing vacant when it caught fire and burnt in 1943. It was said that it caught fire from soldiers from Camp Forrest who hung out on the back porch smoking after the movie. This was the big fire after Dr. Guerry's fire engines and they saved the front arcade of the house which stood for several months, looking just as usual. Visitors got a shock when they drove down North Carolina Avenue and saw nothing behind it. This was when the fire engine was an old limousine bequeathed to the University which would not turn left. So fires had to be approached carefully.

The Barton Barracks were built with war salvage material from Camp Forrest. They were renovated by a gift from Edmund Orgill, a Regent from 1947 to 1953, and they were pulled down in 1965. They were very popular with the students as dogs could be kept there and one student even kept snakes-a barrel full. 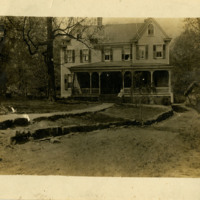