The Allen Gipson House was given by the University of the South to Allen and Manerva Garner Gipson. The house is situated on Alabama Ave., which was originally known as St. Chrysostom Place. Allen Gipson moved from Roarks Cove to Sewanee where he ran a general store located directly across from the depot. Later, he and Tom Gipson co-owned a store in the building now home to Shenanigans. Ten years after Allen Gipson’s death, Mrs. Gipson was forced to put up the house for auction as her son had riddled the family with debt. She sold the modest four-room house for $575 to Lafayette O. Myers.

In 1912, J.W. McBee, the police chief, bought the house. In 1917, the house was given over to McBee’s wife, Mary McBee Summers, who had remarried. After Mrs. Summers’ death Lawrence Green, owner of the City Café, lived there in the 1960s. Tom Wells and his wife then leased it as Mrs. Wells had an interest in older houses. Today the Gipson House is owned by Will and Becca Arnold who are both graduates of the University. Becca Arnold is the daughter of a former matron at the University, Susan Peek 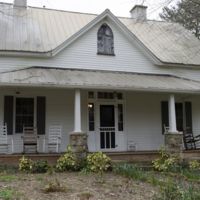