Bishop William Alexander Guerry (1909-1928) was its first notable owner. Guerry, a graduate from the University and School of Theology in the 1880s, served as University chaplain from 1893 to 1907. Upon his election as bishop coadjutor and then as Bishop of South Carolina, Bishop Guerry became a trustee of the University and shortly after bought this house. He served as a regent from 1917 until he was shot in 1928. On June 5, 1928, an irate priest walked into Bishop Guerry’s office in Charleston and shot him. The priest, also a Sewanee seminary graduate, then killed himself. The bishop died on June 9, 1928. It was thought he likely he would have been Chancellor of the University someday, if he had lived.

After Guerry’s death, the house was bought by Martin Johnson, nephew of Vice-Chancellor Benjamin Finney. Johnson first worked as an administrative assistant to his uncle during Finney’s vice-chancellorship (1922-1938). In the mid-1930s Johnson leased the university farm for approximately ten years before handing it over to the University. During that time he leased the Guerry House (1941). The house was then leased by Solace Freeman, Bishop Juhan’s son-in-law and commissioner of buildings and lands under Vice-Chancellor Green. The current owners of the house are Dale and Leslie Richardson 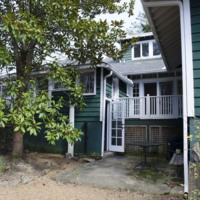