This house was built by Otto Fischer in 1890. The house was passed on to the University until 1900 when it was bought by Frank Lautzenheiser. He was the University gardener. He sold the house to an A. Mansfield in 1917. In 1927 Henry and Lola Hoskins bought the house and lived there for fifteen years. Known as the “Old Sewanee Hackman,” Mr. Hoskins was a familiar figure at the University, maintaining his hack stand at the University Supply Store. To owe him for hack service was almost a prerequisite to graduation. His hacks, drawn by two horses and rented with or without a driver, were in special demand during the Easter and commencement dances. In later years he was engaged in the ice business.

Lee and Ethel Porter bought the house in 1948 and lived there until 1970, selling the house to Mr. Joe David McBee. A Sewanee staple since birth, Mr. McBee has served as Road Commissioner for Franklin County, Secretary and Chairman to the Franklin County Highway Commission, and is member of the Franklin Democratic Party, Friends of the duPont Library, Franklin County Historical Society, Sewanee Civic Association, Sewanee Leaseholders, Inc.—to name a few. In 1980 the Franklin County Jaycees named Joe David as the “Outstanding Young Man of the Year” and in 1982 the Tennessee Senate passed resolution No. 192 in honor of Mr. McBee. In March of this year he was recognized for 50 years of service working in duPont Library. He has contributed greatly to the welfare of the residents of Sewanee and the business of the downtown area—a true member of the community. He sold the house to Robert and Joan Berndt in 2017 and David and Edith Johnson are the current residents. 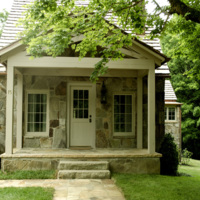