In the very early years of the University there were several instances of Confederate widows who moved to Sewanee in order to afford putting their sons through school at the University. One such case was Mrs. Mary Dunbar. In 1873 she took out a University lease for a property on Tennessee Avenue and built an ell-shaped, three-room house for herself and her sons. Mrs. Dunbar ran an elementary school primarily for young girls in one of the outbuildings of the old Sewanee Inn (present day location of Elliott Hall). Mrs. Dunbar eventually bought the little building, had moved across the street and attached to the back of her house. It is unclear if she continued to run her school there. One can still see these structural connections in both the basement and the attic of the house.

When the Dunbar sons moved away, they sold the house to the University. It then became a fraternity house for the medical school, whose members opened a big double door between the front and back rooms on the left side. In 1909, when the medical school closed, and the house was bought by a dentist, J. P. Corley. The dentist made the original main room (front of the house on the north side) into his office, using the bay window for maximum light around the dental chair. His patients entered by a staircase and small porch on the north side and the room’s old back porch became an entrance hall and waiting room. During WWII Corley’s family decided to leave Sewanee. The house was then a rental property and went into a long, slow decline with occupancy changing constantly until Waring McCrady, son of Vice-Chancellor McCrady, bought it in 1972. 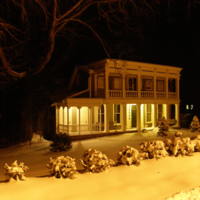