Despite being built in 1905, the earliest record of this house is of Dr. Herbert Collins’ buying the lease in 1910. Originally from Birmingham, Alabama, he received his medical degree from Sewanee in 1906. It is assumed that he practiced in this area. He died in 1966.

Everett B. Collins, a relative of Dr. Collins, took over the house in 1954. Mr. Collins, a member of the class of 1920 at the Sewanee Military Academy, was also a member of the Cumberland Presbyterian Church and the Masonic Lodge. He had worked many years for the University of the South as a plumber before his retirement. He died at 79 in 1980. In 1984 his wife, Elizabeth, and son, Charles, took over the house. Today the house is owned by Charles, among other Collins relatives. 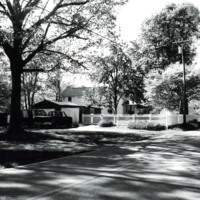