This house was built by Dr. Reynold Marvin Kirby-Smith. A widely known physician at Sewanee and a son of Confederate General Edmund Kirby-Smith, Dr. Kirby-Smith was a Sewanee staple. He was educated at the Sewanee Military Academy and the University, where he received his Doctor of Medicine in 1895. Dr. Kirby-Smith served with the U. S. Army Medical Corps in the Philippines during the Spanish-American War and retired from the Army in 1907, but continued in the medical reserve and rose to rank of colonel. During World War I he was a surgeon in charge of two medical units of the Red Cross, establishing a field hospital in France and doing emergency service in Serbia during a typhus epidemic. In 1907 he became associate professor in the medical department of the University and built this house. The next year he became health officer of the University, a post he held for 40 years. He was also the former chief of staff of Emerald Hodgson Hospital. Because of his passion for accuracy, Dr. Kirby-Smith was a treasured source for Sewanee anecdotes. His earliest memory was going through St. Luke’s Hall when it was being built. He would have been four years old. He said his greatest childhood fright was when the McCrady house burned. He had been seven then and had hid in the hedge of the Galleher house.

Dr. Kirby-Smith’s wife, Miss Maude, also had a stark impact on the Sewanee community. She was one of the founders of the literary society, the Fortnightly Club, and served as an officer in the United Daughters of the Confederacy. Perhaps her proudest office was as president of the Civic League, a club that ran a tea room and had rummage sales to make money to keep the University Cemetery clean and to see that the University grounds were neat and tidy. Miss Maude also was a member of St. Augustine’s that kept All Saints clean. Maude was noted to being a person most likely to be the first friend to come with aid and comfort to the homes of bereaved friends. At the house she held “Tuesdays at home.” People came to have intelligent talk and to enjoy cheese straws and chocolate cake. This custom mixed people of different ages and professions. Miss Maude will be remembered as a gracious and charming lady to everyone who knew her.

The house was passed on to Dr. Kirby-Smith’s daughter, Catherine “Kiffie” Clark, when her father died in 1962. It was recently bought by the University from the Hursts and is intended to become a guesthouse. 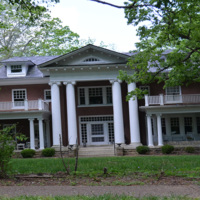