This house was built in the fall of 1870 for General Gorgas. He and his family first stayed in the Gailor cottage while Brierfield was being built. Gorgas named it Brierfield for the town in Alabama where he had had iron works. General Gorgas came to be Headmaster of the Junior Department in March 1869, and was made Vice-Chancellor in 1872. General Gorgas' son, "Willie," lived here while he attended the University from 1869 until he graduated in 1875. He was the Director and Captain of the Hardee Baseball Team and President of the Football Club. He, of course, was the famous Major General William Crawford Gorgas of Yellow Fever fame at Panama. He was Surgeon General of World War I, and was made a Knight of the British Order of St. Michael and St. George by King George of England, in June, 1920, shortly before he died.

General Gorgas sold Brierfield to Dr. Telfair Hodgson when he came to Sewanee in 1878. Dr. Hodgson was first made Dean of the Theological School. As finances were very low in 1878, it was thought best not to elect a Vice-Chancellor and thereby avoid paying that salary. He did become Vice-Chancellor in 1879. Dr. Hodgson built the tower on the north of the house and had his office in the room on the first floor under it. He is suspect to have added the bay windows, the porch on the south, and the servants' house at the same time. His widow lived in the house until her death in 1907. His son, Telfair, Jr. was Treasurer of the University from 1907 until 1949 when he retired. He made extensive additions on the south side and changes inside. The house was never a dormitory for students, but Mr. Telfair Hodgson kept a bachelor hall in it until he married in 1917. His widow, Mrs. Medora Cheatham Hodgson, did live there after his death in 1952 and the house continued to be a center of Sewanee life. Mrs. Hodgeson, daughter of Brigadier General B. Frank Cheatham, C.S.A., died on March 14, 1969 at the age of 92. The home is now owned by her daughter, Mrs. Edward F. Parker. Brierfield has been in the Hodgeson family for 115 years. 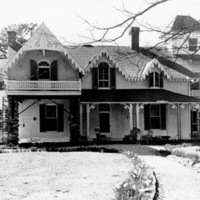