In 1866 the Rt. Rev. Charles Todd Quintard, Sewanee's first vice-chancellor, moved into a recently completed two-room log cabin. It was one of only two houses in Sewanee, the other being Rebel's Rest, and the two structures were similar. The original Fulford Hall was destroyed by a fire in 1889 and replaced by a larger frame building in 1890. Although it has undergone several significant renovations over the years, the 1890 structure still stands today. From the 1910s to the 1930s, the building functioned as a dormitory and an infirmary. Fulford Hall has housed seven vice-chancellors, Quintard in the 19th century and five from the tenure of Alexander Guerry through that of Robert Ayres. In 1989, Fulford Hall became home to Office of Admission, Office of Communications, and Office of Financial Aid. 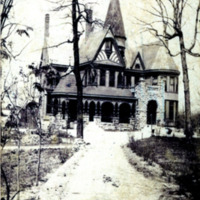