This house was built by the University for Dr. Theodore DuBose in 1888. He was the University’s health officer until 1891. In 1906, the house was passed to Dr. DuBose’s uncle Rev. William Porcher DuBose for his organization, the St. Luke’s Brotherhood for the Increase of the Ministry. Formed in Nov. of 1892, the Brotherhood’s function was to foster interest in the ministry and provide assistance to candidates in the School of Theology. Rev. DuBose was the president of this organization and dean of the theological department.

The house was later acquired by his son, Rev. William Haskell DuBose. He was a professor in the School of Theology and ministered churches in Tracy City and Monteagle. After Rev. DuBose’s death in 1936, the house was rented to various theologues. It was razed to make way for Bishop’s Common. 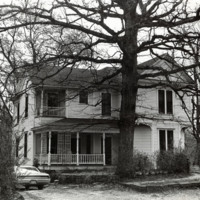