In 1870, Bishop Alexander Gregg of Texas took a lease and shortly thereafter built Ambler Hall. He called it “Marlborough” after the South Carolina county where his wife was born. George Fairbanks called Gregg “The faithful, earnest and tried friend of the University.” Every year Gregg made a personal appeal and took a collection from each parish in his diocese; consequently, Texas was the largest contributor to the University. He spent 25 summers on the Mountain and became the university’s fifth Chancellor (1887-1893). After the Bishop died in 1893, his daughter, Mrs. M.A. Wilmerding, ran the house as a boarding establishment for summer visitors and students. Her daughter grew up here and married a beloved alumnus, the Rev. Francis Willis Ambler, from whom the hall took its name.

In 1903, Dr. Thomas Tidball came to Sewanee to teach at St. Luke's. He lived in this house for 23 years and kept up quite an elegant establishment as he was a widower with many servants and frequent dinner parties. After his death various people rented the house. Miss Johnnie Tucker ran it a few years after Old Tuckaway burned and then Mrs. Wright lived there from 1923 to 1934. In 1940 the University purchased the house. The Amblers only asked $2,000 for the house. At this price the University considered it practically a gift. The University remodeled the house into four apartments and called it Ambler Hall. In the 1940s the hall became an “overflow dormitory” for the Sewanee Military Academy. The hall eventually became home to the Sewanee Military Academy Band.

In more recent years Ambler Hall was divided into three apartments for University faculty. The house and its student cottage are presently owned by Dr. and Mrs. J. Edward Carlos. 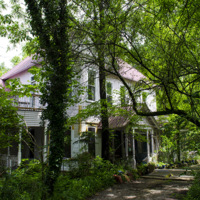