The first house on this site was built in 1873 by General Gorgas for a student dormitory. The house almost immediately burnt in December of 1873 and he used the $1, 200 insurance to build another. It had four rooms upstairs and four downstairs- the typical amount of rooms for student cottages. When Mr. Gailor came in 1882 to teach at St. Luke's he lived there and his mother boarded with Mrs. Tucker at Palmetto. Dr. Hodgson, the Vice-Chancellor had bought the Gorgas house and cottage and offered, if Mr. Gailor would give up a lease he'd taken on the lot where Johnson Hall is now, to sell him a strip of his own lot with the cottage. This was done in 1884. Dr. Hodgson had known Chaplain Gailor in the seminary in New York, and the families were old friends.

When Gailor was made Bishop in 1893 he kept it as a summer home where the four Gailor children would grow up. Charlotte Gailor used to say that her parents, whenever the roof leaked, would add a room instead of having the old roof repaired. There were three bathrooms and, depending on one’s definition, six or seven bedrooms. When the living room was conjured up, with its own fireplace, a chapel was added at the far end. The Bishop conducted family prayers there every evening, and an occasional baptism and even confirmation. After his death in 1935 the house was inherited by Miss Charlotte Gailor, his daughter and the chapel was deconsecrated. Its altar went to a small church in a neighboring town and Bishop Quintard's stained-glass window is now in the University Chaplain's office, in the cloister of All Saints' Chapel. Two small stained-glass window and a Madonna remained as testimony to the room's original function. Charlotte Gailor lived there till her death in April of 1972. The Gailor House, inherited by Dr. Robert Daniel, her nephew, and then by his children, was sold to the University in the 1980s. It has since been torn down for Chen Hall (1991), the Vice Chancellor’s current residence. 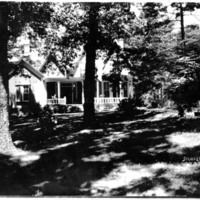