Dr. C.J. Bickham, a well-known physician of New Orleans, built this house in 1874. Although he intended it to be a summer home, it sat empty for many years. Caskie Harrison, professor of ancient languages, took the house in 1877 and lived there until he left the University in 1882. Originally from Virginia, he was studying in Cambridge when Bishop Quintard persuaded him to come to Sewanee. Harrison’s son, the novelist Henry Sydnor Harrison, author of Queed, was born in this house and another son, Jack, taught at the Sewanee Military Academy for several years. Harrison was reported to be a “severe but brilliant teacher” and when he left Sewanee he founded the Brooklyn Classical School in New York. In 1889 he received the Honorary Degree of Ph.D. from the University. After Harrison’s departure, various people lived in the house including Mrs. Memminger, a widow from Charleston, whose three sons, Wilkie, Lucien, and Edmund, went to the University from 1893-1898.

In 1894 William Boone Nauts, who graduated from the University in 1882 and was professor of Latin from 1893-1931, bought the house and lived in it until his death in 1931. Both of his sons also went to the University. Nauts, an ardent collector of materials printed in Sewanee, sent his collection to be on exhibit at the Chicago World's Fair in 1893. Unfortunately it was all lost in transit. However, he was able to later compile another collection, with only a few exceptions. After his death Mrs. Nauts gave the materials to the University Archives. Nauts was a part of Sewanee life for so many years that someone once joked, “In the flood, Noah just missed landing on the Mountain with Nauts and MacKellar.” During the 1930s, the house was rented to various people. When the old "rectory" burned in 1939, Misses May and Susie DuBose bought the house. After Miss May’s death, the University bought it and in 1964 it was sold to Harry Stanford Barrett, artist-in-residence.

The house has been owned by Doug and Anne Seiters since 1999. 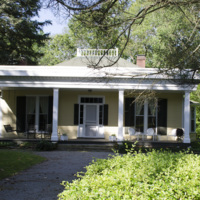