This house, opposite the former Sewanee Military Academy, has had so many residents it is hard to know what to call it. W.A. Gibson, who had a grocery store in the village, built the house in 1869 for his sister, Miss Annie Gibson. However, Miss Gibson didn’t live there until the mid-1870s. The house was first leased to Mrs. Mary McFarlane Duncan in 1871 by the University and then to G.B. Green in 1872. After Miss Gibson moved in, she also took in boarders such as Col. and Mrs. Arthur Middleton Rutledge who stayed with her in May 1875. W.A. Gibson built a large addition in 1874 and for several years he advertised the house for sale with the description “Fourteen rooms, fine well, seven acres.”

Col. Schaller, professor of modern languages, lived in the house from October 1875 until 1879 before Miss Gibson was the main occupant again for a few years. It was then rented for 10 years until 1881 when Dr. Benjamin Wells bought it. Wells lived there until 1899, during the years he taught at the University. A noted wit, the Purple said of him, “He lays about him with such keen wit and stabs so deftly that the victim only finds he is hurt when the undertaker comes to measure him for his coffin.” In 1893, Burr Ramage became dean of the law school and lived here until he left Sewanee in 1901. Beginning in 1905, the next owner was Samuel Sharpe, an Englishman from Natchez. He had three sons who went to the Sewanee Military Academy and two daughters who married students. In fact, one son-in-law, Newton Middleton, wrote the Alma Mater. The next owner was Mrs. Echols from Huntsville, Alabama, who lived there until 1943 when it was bought by the University. The University rented the house to Col. Alderman, then the Robert P. Moore family, and then others connected with the Sewanee Military Academy. For a few years it was used to store furniture. Frank Thomas, who was an English and dramatics teacher at the Sewanee Military Academy, purchased it in August 1969. The house is currently owned by Nate Parrish. 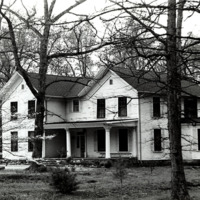