Mr. Bork, proprietor of a tin shop in the village, built this house. Along with other his other wares, he made torches for celebratory processions. The News in November 1876, stated that torchlight processions were the favorite way to celebrate. A letter, from June 11, 1874 reads, “They are making grand preparations for the coming meeting of Trustees in August. The Chapel is being enlarged 20 feet. They are getting torchlight processions and fireworks ready.”

Mr. J.A. Van Hoose, the next leaseholder, was here from 1877-1879. He was a graduate of the College and was a deacon, proctor and also became headmaster of the Grammar School. Van Hoose later became mayor of Birmingham. He also served as president of the Associated Alumni and a trustee. In 1879, Mrs. Mary Esther Huger of Charleston, bought the house. Mrs. Huger had twelve children. One daughter, Harriott Lucas Huger, married Dr. John B. Elliott, the University’s first health officer. Another married the Rev. Theodore Porcher. Mrs. Huger ran a school for young children and had a cottage in the yard for students. The Mountain News reported in April 1879 that Mrs. Huger was to open her “infant school.” Mr. and Mrs. Huger supposedly did not talk for 20 years. However, when Mr. Huger died, his long-separated widow still dutifully followed the rigid Southern custom of going into mourning, wearing black “down to her heels,” and made no social calls all summer. Mrs. Huger died in 1898. Mrs. Blanche Hindman Cox bought the house and the cottage in 1925. She made numerous changes to the two buildings and moved to the cottage in 1927. In 1927 the lease of this house was taken over by S.D. and M.H. Cole. Mrs. Jane Sidney Robison, the wife of a retired minister, bought the house in 1940 and lived there several years after her husband died in 1947.

Remington and Ramona Rose-Crosley are the current owners of the house as of 2001. 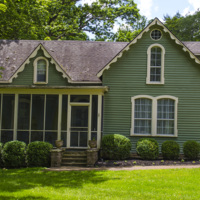