In 1871 Pierre Barbot took a lease on this lot and presumably built the house soon after. We are fortunate to have an early picture of how it looked before various changes were made. Monsieur Barbot, the first tailor, was from Paris via Winchester, Tennessee. He soon had a partner, also French, Lazare Pillet, and their business grew and flourished, carried on from this house in which they also lived. All the students, Grammar School and College, wore military uniforms with elaborate braiding and brass buttons made by them. They also made elegant dress suits, ladies' riding habits and children's suits. Monsieur Barbot soon left, but Pillet was an important figure in Sewanee life for many years. He also had a partner, Monsieur Fabard. "The older residents remember his (Pillet's) erect, dapper figure, back straigt as a line, well-dressed always in perfect style (his own wonderful creations), tight of fit, and so curved in at the waist as to suggest the use of stays. On special occasions he wore, a frock coat and silk hat. Courteous always, with his floriated French manner and black mustache, he was the Parisian through and through." (Purple Sewanee, 39-42) He was an enthusiastic gardener and it was he who planted the boxwood on each side of the front walk. His flowers were sought by the beaux who sent his stiff little bouquets to the girls at the dances. His wife died and is buried in the Sewanee Cemetery with her infant daughter. When Fabard died, Pillet decided to return to France and retire. He married Madame Fabard and was on a visit in Kentucky when he died and was brought to Sewanee and buried beside his first wife.

The house became a dormitory for the Medical School before being bought by Mrs. J. C. Bradford of Nashville in 1892 as a summer home. Mr. John Breckenridge Hunt bought it from her in 1911. The house has been occupied by members of his family ever since. His wife, Mary Love Washington was a free spirited woman and followed Mr. Hunt to his various lumber camps, living in mountain cabins or townhouses—wherever he happened to have a mill. They both truly loved the woods and the freedom of country living. This love was expressed in the many trees and shrubs Mrs. Hunt planted during their time there. They are still visible today. After Mrs. Hunt’s death in 1934, her daughter, Mary Crockett Hunt, took over the house. For forty years, she served as a secretary to the superintendent, paymaster, registrar, and anything else that came along at the Sewanee Military Academy. She worked with five superintendents. Similar to her parents, she was a lover of the outdoors and became an ardent conservationist and preservationist. She was a charter member of the Sewanee branch of the Sewanee branch of the Association for preservation of Tennessee Antiquities. When she owned the Hunt House she took in University student boarders who then became her loyal fans. She may have live quietly, but she left her mark as “a devoted daughter of Sewanee”. After her death in 1978 the house was bought by Willie Cocke and Lily Hunt. 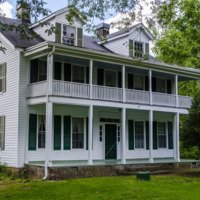