The Lovell home, “Sunnyside,” was built in 1870 by H.N. Caldwell, the town druggist. The house served as his primary residence while the cottage next door (Miller House) was where he operated the “Book Store and Pharmacy.” In August of 1873 the lease was sold and transferred for use as a summer home to Col. William Storrow Lovell from Natchez. Col. and Mrs. Lovell had three sons and two daughters. Prior to the Civil War Lovell was in the US Navy and was part of Dr. Kane's 1853 expedition to find Sir John Franklin, the Arctic explorer who disappeared in search of the Northwest Passage in 1845. Lovell brought back an enormous polar bear skin from the expedition. The polar bear skin was mounted and placed in the hall; it was reported that the children were terrified of it. The house was also full of items from Monmouth, Mrs. Lovell’s family estate in Natchez, and collections from a year the family spent travelling abroad.


Until about 1907, students lived in a wing at the back of the house. After Mrs. Lovell’s death in 1916, her daughter Rosalie Duncan Lovell or “Miss Rose,” took over Sunnyside. Miss Rose remembered many of the early characters in Sewanee and wrote vividly about them in Purple Sewanee. After the rest of the family died, a friend from Virginia, Miss Lily Baker, lived with Miss Rose. The garden toward the west of the house was said to be one of the most charming on the Mountain and was kept up until Miss Rose's death in 1936.

After Miss Rose’s death, the Lovell Home was rented to families of University staff. The widow of the last renters, Mrs. Raymond Hall, remained in the home after her husband’s death and took in student boarders. The house was razed in 1953 when Hunter Hall was built. 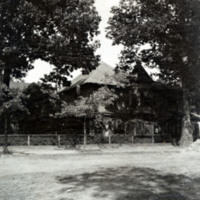