In 1870, soon after she built Saint’s Rest, Mrs. Stephen Elliott had this cottage built to "accommodate 10 students." When her older daughter, Esther (“Hessie”), married Dr. Francis Shoup a year or so later, it became their home and has been called Shoup Lodge most of the time since. Dr. Shoup, a graduate of West Point, was a Brigadier General of the Confederacy who became a clergyman after the Civil War. He fought alongside Bishop Leonidas Polk and was baptized on the battlefield by Bishop Elliott. He taught mathematics at the University of Mississippi for a while after the war and came to Sewanee as a mathematics instructor and acting chaplain in 1870. He was described by one of his students as "Handsome as Plato, indolent until aroused to mental coruscation; mathematician, engineer, Confederate General and, last, metaphysician." For a time, Dr. Shoup had a parish in Waterford, New York where he inspired an Episcopal family in giving Sewanee’s famous Breslin Tower. However, the Shoups returned to Sewanee and he returned to the University faculty in 1883. After Dr. Shoup died in 1896, Mrs. Shoup was the mistress of Shoup Lodge.

After the Shoups, the house was rented to various people but has been owned always by Elliott family ancestors. When Bishop Craik Morris of Louisiana retired he lived in the house for some years until his death in 1944. It was inherited from Mr. Robert W.B. Elliott by Mrs. Charles McD. Puckette, wife of a grandson of Bishop Stephen Elliott. The house was passed on to Mrs. Puckette’s daughter Isabelle Howe in 1979. In 2001, it was bought by a different Puckette, Emily, and her husband John Benson. 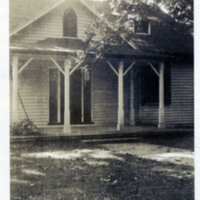