In 1887 the Kappa Sigmas built the first phase of this house, which had only two large rooms and a kitchen. The Cheapes purchased the house around 1900. They added a bathroom and a second level accessed by a set of exterior stairs at the rear of the house. They also created a new kitchen area by constructing a wall in the rear room.

Beginning in 1916 it was used as a Sewanee Military Academy fraternity house for two years. About this time, it was owned by Ina Mae Myers' grandfather, but he never lived in it. Sheriff Jackson bought it in the early 1920s and his widow still resided there when she died more than 50 years later. Jackson made many changes to the house. He had his sons build the sun porch in the front and dig and pick out the stone to make a cellar for the furnace. He also had the fireplace and the front porch stoned. Jackson then made the small porch on the side a “blind” porch. He also had Mr. Castleberry construct an unusual unsupported stairway in the front entranceway and a bay window.

Phil and Jerry White purchased the house in 1975 from Dr. Harold Jackson, a son of Sheriff Jackson’s. An unusual modification made by Jackson was the installation of what he called a “rectifier” in the ground outside the living room. It was still there in 1975 and White noted, “It held and aged the moonshine he took in raids. He used it, in part, as currency to pay Arthur Terrill and others for odds jobs around the house. The pipe from which he drew the whiskey was still sticking out of the ground when I bought the house, but I did not have gumption enough to see if I could recover some mellow shine.” 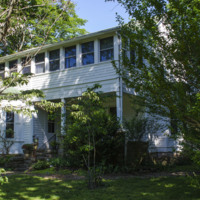