This house was built in October 1874, by Mrs. T.K. Sharkey of Mississippi. The University Record of October 1874 noted, “The cottages of Dr. Bickham, of New Orleans, and Mrs. Sharkey, of Mississippi, ...will add very much to the beauty of the street leading from the village.” After living in the house for a brief time Mrs. Sharkey sold it in May 1875 to Mrs. Joseph Q. Lovell, sister of Antonia Quitman Lovell (whose Sewanee home was Sunnyside). Mrs. Joseph Lovell, a widow with two daughters, lived in Natchez and used this house as a summer home. When she died, the house was taken by the Cocke family. The Cockes had three sons in the University including son Charles who gave the Latin Salutatory in 1892.

Following the Cocke family, the house had several different residents. In 1907, Mr. Hardy the druggist lived there. Then, Miss Lizzie Wadhams lived in the house for a while. Preston Brooks Jr. bought the house in 1921 and the Brooks family lived there for nearly fifty years. In 1970, his widow sold it to Mrs. Kathryn Raulston, who later sold it to Dr. Kenneth Wilson Jones. The only major change to the exterior of this house has been the removal of a narrow porch from each side of the larger, center porch. 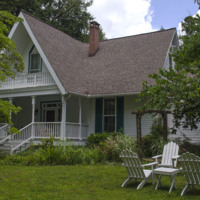