This house was built by John W. Elam in 1872 on the west side of University Avenue across from Kendal. In 1886 the lease was still held by Mrs. Mary Elam. For several years beginning in 1897, it was the residence of Dr. W.F. Shine. In 1900, the Rev. Frederick Ancrum deRosset purchased the house for his mother-in-law, Mrs. Ella Green. Mrs. Green, the widow of Dr. James Green who had practiced medicine in Monteagle, took in boarders and lived in this house until her death in 1925.

The deRosset family still owns this house. Colonel William G. deRosset made it into a two-family house with two furnaces and rented it for many years. When deRosset's brother Armand deRosset and his wife retired and moved to Sewanee they lived in the house. Susan Holmes and Greg Maynard have owned the house since 1996. 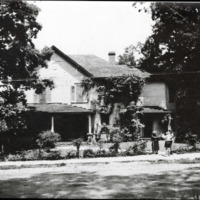