This house and a studio in the yard were built by the photographer Mr. Spencer Judd right around the time he started his photography studio. The Judd family was associated with both Sewanee and Winchester from the earliest days of the University, H. O. Judd operated a laundry at the Depot. Spencer Judd’s father, the Rev. B. S. Judd, was a former missionary to native Americans who came to assist the Rev. Thomas Morris in establishing a church at Winchester. Very soon, however, the Rev. Judd moved from Winchester to Sewanee, probably sometime in the summer or early fall of 1859 and began to hold services in his Sewanee house. Spencer Judd lovingly recalled his father taking him to the laying of the University cornerstone in 1860 when he was five years old.

Spencer Judd lived with his father (in the house later known as the Weber House) until he went in business for himself. He first worked with his older brother, H. 0. Judd Jr., who was also a photographer, however when his brother left Sewanee for Chattanooga Spencer Judd started his own studio. The University News (1876) reported, “C. S. Judd will open a Gallery at Sewanee about the middle of May.” Judd would have been about 20 years old at the time. At one point there were apparently two Judd studios in Sewanee. One was located next to the Barbot and Pillet tailor establishment (Cocke House) and the other behind Spencer’s house. He was an artist in portraiture (often set in an “outdoor” garden) especially of children, and took beautiful photographs of Sewanee scenery: waterfalls, views, cliffs, and laurel. For more than 30 years, Judd’s studio was a fixture in Sewanee and numerous children on the Mountain were photographed by him. Many of Judd’s photographs are found in the University Archives but others are in collections across the southeast. After Judd’s death, his wife continued to live in the house until renting it out for a few years before her death in 1949.

Mrs. Bertha Graves, a beloved figure at the Sewanee Military Academy, bought the house in 1950. She served as dietitian and stenographer for the school. She was known to manage the dining hall with brute strength, never letting a boy go disciplined or worse of all, hungry. Mr. and Mrs. E.P. Govan were the next owners from 1962 until approximately 1969. Other individuals who also owned the house include the Napiers and Jane Burson along with Tupper and Frederica Saussy.  The Saussy's lived there from 1978 until 1997. Archie and Helen Stapleton are the current owners of this house. 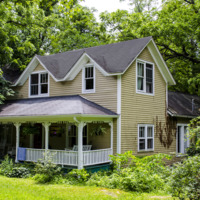