“This was built by Mr. Roberts who had a livery stable in the Village. He kept riding horses to rent, and he owned the first public "hack"--" A long ambulance with narrow slanting seats running lengthwise and no springs that were observable," wrote Miss Sada Elliott. In 1886 Mrs. Herndon, sister of Mr. Stanley Bell of Nashville owned it after her house on Alabama Avenue, "Bellewood”, had burned. She was Post Mistress and had three sons in the College. Her husband had been killed in the Civil War. After that, various people lived in it. Mr. Lebowitz, the shoemaker; Mr. J. B. Hunt, while the present Hunt house was being renovated; Mr. deOvies; Miss Lizzie Wadhams. Mr. William Hamilton finally bought it in 1929.

After William’s death, his sister Mary Frances Hamilton took over the house. At one time in her career, she was the UT extension agent for the area and was an expert gardener. She had many exotic plants and flowers in the yard and had a full time gardener. She never married and had no children, so when she died in 2001, she left it to her nephew Webster. Webster never lived in it and tried to put it up for sale. Unfortunately he September 11 attack happened right around that time and no house sold in Sewanee until the Askews bought it from Webster in August of 2012. The couple have two out buildings that they call cabins that they have rented to hundreds of alumni and parents over the years. Many have stayed there on their wedding night, others have proposed marriage in the cabin, celebrated anniversaries, attended the school of letters, and studied for comps. The cabins are not fancy, but people might come visit Sewanee in the future and try to remember where they stayed. 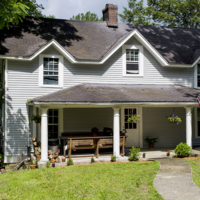