This house was first built by Richard Biddle in 1900. When it burst into flames in 1904, Mr. Biddle barred anyone from trying to save the house. It is said that he blocked the entry with his body and, brandishing a chair, threatened to hit anyone who attempted to interfere with the fated destruction of his property, which he deemed “kismet.” Mr. Biddle was considered eccentric and dubbed Sewanee’s man of mystery. After the fire he built a shack in the woods northwest of Sewanee. The house on Oklahoma Avenue was rebuilt in 1912 by Douglass Vaughn. Mr. Vaughn, a member of the fledgling municipal government for the University, later became the University treasurer. In 1914 the house was bought by David A. Shepard. Shepard was the first salaried alumni secretary of the University, serving from 1912-1920. During Bishop Knight’s tenure as vice-chancellor (1914-1922), most of the official entertainment for the University was done in the Shepard home because the bishop’s wife was considered an invalid. The spare room had to be ready for overnight guests or weekend visitors, and when VIPs were expected, the alumni secretary was home to receive them. These weekly visitors were likely the reason for the many additions to the once modest cottage. By the eighth addition the Shepards started to call the house “Topsy” after the famous character in Uncle Tom’s Cabin because the house just grew. For example, although it had been constructed of hand-hewn timber, in 1945 it was encased in stone to prevent future fires. After his time as alumni secretary, Mr. Shepard continued to make Sewanee his base of operations and ran several businesses from an office located in the back of the home.

The house was passed on to Mary Waller Shepherd Soper and her husband Rev. Soper when he retired from the Episcopal priesthood in 1962. It was during their time that Topsy reached a total of nineteen additions to the house since its construction. The Sopers fittingly named their addition “Turvey.” The numerous additions have caused some quirks in the house, such as different floor levels and an unusual architectural montage at the back. But the additions are part of its charm. The Sopers hosted many of their own exhibits on the house and it was included in multiple historic house tours. The house is owned by Martin and Katherine Davis as of 2013. 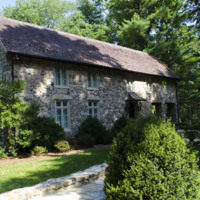