Miss Mary Miller bought the home in 1887. She was described as having a “strange and lovely Chinese face, romantic birth, and most Victorian outlook” (Charlotte Gailor, Purple Sewanee, 1932). She was born of missionary parents: her father English and her mother Chinese. Orphaned at a young age, she was sent to an uncle in the United States. She later fell in love with a clergyman and they were to be married. However, her uncle said that her parents had not been married, making her illegitimate and unable to marry a clergyman. Unfortunately, it was found out after her uncle died that Miller’s parents had indeed been married and her uncle lied to keep control of her financial affairs. Miss Miller presided over “Crazy Corner” (then the name of Miller Hall) as matron of the boarding house for many years. She left all her property to the University in 1911 and the gates in the cemetery were put up in her name.

The next occupants, Mrs. Stewart from New Orleans and her daughters, Minnie and Clara, remodeled the house into two apartments. In 1922, the Rev. Charles Wright bought it for a summer home. Wright, brought from England by Bishop Quintard as a young child, was considered a member of the Bishop’s family. He went to the University and St. Luke’s, and was member of the Board of Regents for 20 years. He was rector of Grace Church, Memphis. He died in 1932.

The house has been torn down. 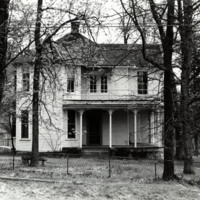