The Mountain News of April 22, 1879 reported, "Miss [Annie] Gibson is to have a residence built on what is known as the ‘Shaller lot’ West End is improving.” Mr. Shaller's name was on the lease in 1875, but evidently he never built on the lot. The Gibson family seems to have had the lease until 1906 when the dean of the Medical School, Dr. John S. Cain, bought the house. At the same time, Dr. Cain purchased the house next door (the Weber house). Dr. Cain’s son-in-law, Dr. Hayden West, had his office in this house and the West family lived in the other. Dr. West died in 1916. When a fire destroyed the Weber house in 1917, Mrs. West moved into the Webb house and lived there until her death in 1944.

For a while during the early twenties, this was the chapter house of the Academy's Beta Chapter of Alpha Phi Fraternity. The Webb family purchased the house in 1948; P.H. Waring Webb was a professor of botany at the University. The following year Webb died suddenly of polio, just before the birth of their fifth child. His widow, Maria Tucker Webb, continued to live in the house until the children were grown. Maria was Sewanne Military Academy’s nurse for more than 25 years and was also night nurse at Emerald-Hodgson hospital for many years. In 1967 her generous gift to the Woods Laboratories provided its green-house, a memorial to her husband, professor Paul Hamilton Waring Webb. Over the years, the house grew with the family. In 1973 Maria moved into a smaller house and sold this one to Percy Warner Frazer who used it as a summer house for many years. 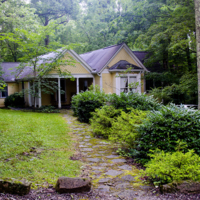