Mrs. Chitty, Here are two accounts that support your belief that the EQB club once met in the house Mrs. Beasley has bought: ...we finally decided to have a regular meeting place, which could be furnished as a reading and recreation room. We secured the lot back of Thompson Hall, now known as the "Union", and, by assessment on the members, raised the money to build the small wooden house, which is now used as an office by the Health Officer, and there we held our meetings for several years. A billiard and pool table was installed in the back room and was in constant use. On rainy days especially we found it a delightful exercise. When the Vice-Chancellor decided to build a permanent Supply Store, we consented to donate our cottage and accept the two rooms over the Supply Store for our EQB quarters and that location we greatly enjoyed until the Supply Store was burned, and then we built another home for the Club in Elliott Park... (Bishop Gailor-Some Memories)

...in 1889 it moved into a club house which it had built at the rear of Thompson Hall, on the spot where the doctor's office is now. This was a small one story house with probably three rooms and it was used by the club for about ten years until 1899. Later when the movie addition to Thompson Hall was built this house was moved by the University down the street to a location just below Dr. Torian's residence.

It was said to be the office of Dr. R.M. Kirby-Smith, dates unknown. It was moved down the hill to its present site in 1941 to be the residence of John Hodges. Mrs. Echols and her niece lived there for a time. the the residents more or less in order were John and Ellen Webb, Harry and Jean Yeatman, Cruse and Jim Clark, who sold it to Ed and Elizabeth Camp. The Camps added the left wing. The most recent resident was Peggy Reavis, who was living there no later than 1969. 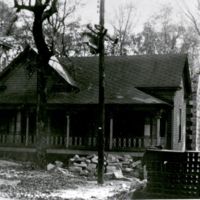