This house stood on University Avenue on the lot where the stone house owned by the University next to Mrs. Wyatt-Brown's is now.It was built in 1871 by Dr. Buchanan and described then as "large and commodious". It was a big square two storied house with a hall going through and rooms on each side.
A Mrs. Corpening acquired it in 1878. she had 3 sons who went to the Grammar School. Charles went on to the Naval Academy and got his B.S. there in 1885. Richard V. entered college here in 1879, and J.M. seems to have left after Grammar School. She took other students to board. The Mountain News of April 4, 1879 says, " A new front and piazza have been added to the home of Mrs. Corpening".

In 1888 Mrs. H.M. Dwight acquired the property and then there were various other owners. The names of E.C. LeGare, Mansfield, and Miss Graham, sister of the Deaconess who lived in the Dr. Elliott house across the street, appear on the lease. It was made into apartments but nobody lived in it long. Dr. Lear had his office there at one time. In 1925 Miss Barnwell from Charleston who was later Mrs. Pringle was the last owner. She left it to the University and it was used for storage for a while and pulled down in 1961 when the stone house owned by the University was built. 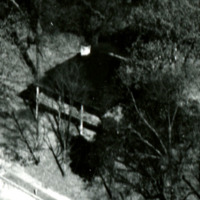