This house was built by the University in 1887 for Mrs. Frances Sylva D’Arusmont Guthrie. She lived there with her two sons, Kenneth and William Norman. Both became clergymen and William Norman was the well know rector of St. Mark's-in-the-Bowerie in New York. The builder was Mr. C.W. Scofield who also built the Truslow-Elliott house that same year. Madame Guthrie was the daughter of the famous Fannie Wright, a feminist abolitionist who built a commune in a tract of land south of Memphis (modern day Germantown) called Nashoba to emancipate and educate slaves. The Guthries had lived abroad in Dundee, Scotland until they came here. Both sons had been to school in Germany and France. Madame Guthrie only stayed a year in Sewanee. She spent the rest of her life in Memphis trying vainly to recover her mother's land and importuning all the lawyers and clergy she knew to help her.

Bishop Robert Elliott, the first bishop of West Texas died in 1887 at the age of 47. His widow came to live in Sewanee and bought this house in 1888. She came with her family of three daughters and two sons. The house easily became a center of social life and activity. Mrs. Elliott died in 1894.

Lionel Colmore, an Englishman, had been "Commissioner" of the University in 1895. He lived in several other houses before he bought this one in 1905. He was then Commissary of the University. His three sons had finished college and never lived in this house. Harry had been killed in an accident, Charles was later bishop of Puerto Rico, and Rupert a physician in Chattanooga. Colmore was very popular with the students, who called him General. He died in 1922, leaving the house to his daughter Dora. Both she and her sister Eva lived here. Dora, a famous cook, built a flourishing catering business during the Guerry regime. Eva died in 1948 and Dora lived on, an invalid for several years until her death in 1963. The house was rented in the summer for several years and was bought by Mrs. Jean Tallec in 1966. Mrs. Tallec, her daughter, Christi Ormsby, and the two Ormsby boys lived there until the home was burned down on December 16, 1971.

A modern home has since been built on the site by the Rev. Herbert Wentz, called the Wentz House. 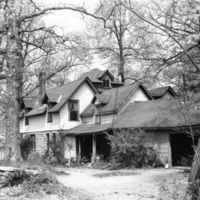