This house was built by Mr. C. J. Schofield, a contractor, builder, and also Secretary to the Vice Chancellor, for Dr. J. W. S. Arnold in 1887. The same year, Mr. Schofield built the Colmore house. Professor Arnold had succeeded Dr. John Elliot as Professor of Chemistry. With him he brought a laboratory worth over $30,000, containing some of the “finest apparatus in the world”. This laboratory was housed in a small building on the back of his property. This one-room cottage, built by Bishop Quintard for Mr. Kline and Mr. Hale, was moved from “opposite St. Luke’s”.

Dr. Arnold was also active as University Medical Officer. Already suffering from asthma when he came to Sewanee, his health obliged him to retire after one year. He died in 1889. The next owner of the house was Mrs. Henry Edward Young of Charleston. Two of her sons attended the Academy and the University. Captain Albert McNeal lived here while Dean of the Law School from 1901-1907. This was probably the liveliest period of the house’s history. He was a widower with three popular daughters. The oldest, Miss Kate, kept house for him. The younger daughters, great belles, married students and the two sons attended the University. The next owner in 1907 was Edmund “Kirby” Kirby-Smith, the oldest son of General Kirby-Smith. He was an engineer and plantation owner in Mexico. In 1895 he married Miss Virginia Tellez of Salgepas, Mexico, who lived here for some time with her four children. He changed the house by putting a porch around it. The next owners in 1920 were Mr. and Mrs. Grover Sykes. She was one of the Hamptons from Tracy City who were connected with the management of the coal mines there.

In 1924 Miss Marie Truslow and Miss Charlotte Elliot bought the house and lived here until they died within ten days of each other in 1958. First arriving in Sewanee in 1871, she was the granddaughter of Bishop Stephen Elliot, first Episcopal bishop of Georgia, and niece of Sarah Barnwell Elliot. She was educated at the Atlanta Female Institute and at St. Catherine’s School in Brooklyn. A dramatic soprano, she was once a member of the Metropolitan Opera Chorus and for seven years was affiliated with the department of music of the Library of Congress. During her life in New York City she gave many concerts and there was soloist at the Episcopal Church of Zion and St. Timothy’s. In NYC during WWI Miss Charlotte met again her school classmate, Miss Marie Jermain Truslow, who, because of the war, had just returned from her sculpture studies in Florence, Italy. Together they opened the Home Studio for young ladies interested in studying music and art. In 1924 they closed the school and retired to this home in Sewanee, which for nearly 30 years was the center of much of the community’s musical activity. Miss Charlotte taught music and speech at the University and gave her concert wardrobe to the student dramatic society. For all of these years the house was known as the Truslow-Elliot House. They made many improvements inside as well as the brick terrace visible on the outside. After their deaths, Stephen Puckette, a cousin of Miss Charlotte’s bought it for his home. When he left for the University of Kentucky in 1966, it became the home of the Drs. Anita and Marvin Goodstein of the University Faculty. It is now owned by Joseph DeLozier as of 2016. 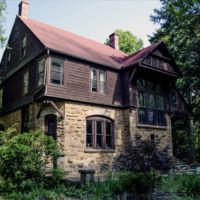