This house stood on the west side of University Avenue where the Corley house is now, next to Tuckaway. It was built by Mrs. Field Dunbar. The September 1873, University Record noted, "Mrs. Dunbar's handsome cottage home has been completed." It was called "Sleepy Hollow" at one time. The next year she opened a school, the first one for the children of the University families. "All branches of a female education carefully taught with French and Music; for girls with a few small boys," says her advertisement in the University Record in June 1873.

“Through the mists of memory come glimpses of Mrs. Dunbar and her school: glimpses only, for the writer was one of a row of tiny girls (amid a small sprinkling of boys) who, in white, ruffled aprons, and high buttoned boots, sat on the bench in that awful spelling class, a special bane!... Mrs. Dunbar herself was a very vivid personality; a plump and pretty little woman, with grey hair, very rosy cheeks, and a very determined manner. Everything about her spoke of law and order, from her sheet white collar and cuffs, over her black widow's dress, to the piano legs (very large legs) which were encased in brown Holland bloomers, so that small feet, in practicing, would not scratch of deface them. Her schoolroom was kept in perfect order--and when she wrote on the blackboard she wore deep cuffs of brown paper to protect her sleeves." (Purple Sewanee, page 51)

The Lovells, DuBoses, and Fairbanks all sent their daughters to Mrs. Dunbar’s school. Her own daughter, Miss Virgie, married the Reverend Stewart McQueen who went to St. Luke's and was a Trustee for many years. Her son, Richard Field Dunbar entered college in 1870. 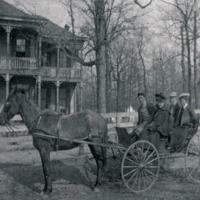