The home on University Avenue, Sewanee, now occupied by the Hospitality shop is one of the older homes on the domain. The Rev. Mr. Philip Werlein has many happy memoiries of visits to his Grand-Mother in this home, built in 1891? "IDLEWILD" was the name given to the Sewanee home of Dr. and Mrs. Fayette Clay Ewing. Dr. Ewing (1824-1872) was born in Logan County, Kentucky, educated in Kentucky and went to Thibodaux, Louisiana, Lafourche Parish to practice medicine. He was an army surgeon of recognized superior capacity in the Civil War. He married in Assumption Parish, Louisiana, February 3, 1852, Eliza Josephine Kittredge (1833-1914) at "Elm Hill", home of her parents (Dr. Ebenzer Eaton Kittredge and Martha Wills Green). At this wedding, which was a brilliant function, the Rt. Rev. Leonidas Polk, then Bishop of Louisiana officiated. Eliza Kittredge Weing was the mother of six children: three daughters, Leila Wills Ewing Werlein; Ida May Ewing Dabney; Jessie Aline Ewing Gillis and three sons-Judge Presley Kittredge Ewing; Dr. Fayette Clay Ewing-educated at the University of the South, his son Fayette Clay was a Professor at the University of the South and died of a heart attack in December 1914; Quincy Ewing, Episcopal Minister, writer of renown, education in the academic and theological courses at the University of the South. It was a leading thought with her to have each son in a profession and was very proud that each was distinguished enough in his profession to be in "Who's Who of America: among the leading men of the Nation.
Mrs. Ewing was a confirmed member of the Episcopal Church. After the death of her husband in 1872, she managed the estate and completed the education of her children; later she lived at her home "IDLEWILD", an attractive cottage banked with flowers at Sewanee. She was an accomplised musician and a great favorite of the students-she played for so many of their parties.

Mrs. Ewing died in Louisiania while visiting her daughters, March 29, 1914 and is buried by her husband in st. John's Episcopal Cemetery, Thibodaux, Louisania. The cottage, Idlewild, Sewanee, remained in the family, being the summer home of her son, Presley Kittredge Ewing....

Note: the Floor plan of IDLEWILD is the same as several other Sewanee homes of the period-front hall entrance and the stairway to the second floor goes from the back hall. (EAL 9/78)
IDLEWILD had a new owner in 1924 when Dr. William James Crockett, Dentist, came to Sewanee to practice. Dr. Crockett was born in 1880 in Franklin, Tennessee and educated at the University of Kentucky. He married Miss Laura Shackelford (1886-November 26, 1977) and they had one son. When the Crocketts moved Sewanee they remodeled IDLEWILD to meet their needs, a front wing with anew door was added for his Dental Office. During the summer months, 1924-1947, the Crockett family moved to the Monteagle Assembly and he practiced Dentistry there. Dr. Crockett was a member of the Emerald-Hodgson Hospital staff from 1943 to 1946. In 1947 IDLEWILD was sold to the University of the South and Dr. and Mrs. Crockett moved to Newman, Georgia. Dr. Crockett died in Columbus, Georgia in 1961. W.J. Crockett Jr. was a member of the Sewanee Academy Class of 1938 and graduated from the University of the South in 1942.

Proceeding of the Trustees, June 7/8 1961 Archives, University of the South 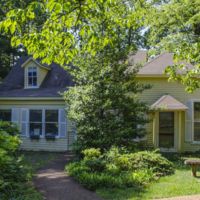