Tom and Ethel Hawkins bought this house in 1939. Tom was a member of the enormous Hawkins family who were among the first settlers of Sewanee. The cove below the Memorial Cross, known as Hawkins Cove, was where the family first settled. Tom was a son of Wallis and Marguerite “Maggie” Luchsinger Hawkins who were noted for their work at the University Supply Store. Tom himself worked there for 47 years and handled the stationary department. It included textbooks, shoes, caps, and gowns. Tom’s son Hub and his nephew, Jack, came aboard during World War II. After the deaths of Tom and later Ethel, George and Mary Louise Gilliam bought the house in 1967.

In 1973 the house was bought by William R. Irwin and his wife Helen Louise Prince Irwin. Louise’s mother was a Hawkins, Irene Hawkins Prince. 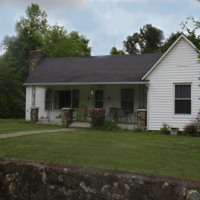