This house was built in 1900, but the first name on the lease, Mrs. Jane Kane, didn’t buy this house until 1902. Maddie Betts bought the house that same year and lived there for seven years. The Handys bought it from her in 1909. Frank Handy was a professor at the University and was known for his translation of Sapphic verse. They lived in the house for over fifty years, until Mrs. Handy’s death in 1965.

C. Houston and Jessie Beaumont were next to live there. Houston Beaumont was executive vice president of Tennessee Consolidated Coal Company and Jessie was a local artist. She made “Belleek” porcelain and would show her creations at the spring and fall arts and crafts fair in Sewanee. Her specialty was Nativity scenes. Jessie began making Belleek porcelain at the insistence of her late son, known as “Bink,” who studied art at Saint Andrew’s School. Using his molds, she started the hobby and has perfected her craft through trial and error. She built a garage adjacent to this house to have a kiln room. She also has a talent for poetry and her book of poems, “Reflections in Rhyme” has been printed by the University Press. Many of the poems relate to childhood memories, others to seasons, one is on being a grandmother. In the late 1970s the couple moved to Destin, Florida, selling the house to the University. In 1984 Evelyn and William Brown Patterson bought the house. A Rhodes Scholar and professor of history at Davidson, Mr. Patterson became a dean of the University in 1980. Dean Patterson has been honored by the National Endowment for the Humanities fellowship for younger scholars; a first-year graduating fellowship from the American Council of Learned Societies; the visiting fellowship at St. Edmund’s House, University of Cambridge; the Folger Shakespeare Library’s short term fellowship; and a fellowship from the University of Wisconsin’s Institute for research in the Humanities. Evelyn Patterson was also a scholar, educated in classics at Smith College and Harvard University. 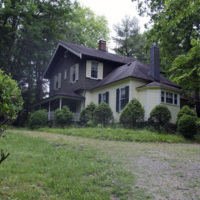