This house was built in August of 1887 for Mrs. Anna Lull. A couple of years later it was bought by Mrs. Emma C. Sutton. She was the mother of Mrs. Silas McBee, who died very young. Silas McBee was an architect of Walsh-Ellet Hall. Mrs. Sutton’s other daughter Mrs. Carter had also died young and left her daughter, Emma Sutton Carter, in her grandmother’s care. She and her husband were killed in a car accident.

In 1930 the house caught fire and was rebuilt by its owner at the time J.F Gilbert. It is currently owned by the University and rented by various theologians. 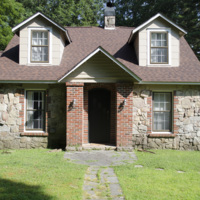