Founded to Make Men: Explorations of Masculinity at the University of the South 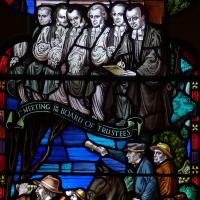 In 1932, in the midst of the catastrophe of the Great Depression, the chaplain of the University of the South, the Rev. Moultrie Guerry, published a thin volume of biographical sketches titled The Men Who Made Sewanee. At a moment when global economic collapse jeopardized the University, Guerry looked to the past for the uplifting legacy of those “leaders of men” who had steered the university through earlier crises and calamities and “found the crowning glory of their manhood in the ministry of God and men, and of Sewanee.” Once again the times demanded such men and their capacity for selfless heroism and patriotism. Sewanee need not fear for its present or future, Guerry professed, because “Sewanee was founded to make men” such as these.

In citing a historic and enduring “Sewanee manhood” that would see the University through its trials and ensure the realization of its mission, the chaplain was doing what generations of Sewanee’s students, professors, and officers before and after him have done. He was drawing on an ideal fixed in the foundation of the University of the South since its inception in the late 1850s, when the Bishop of Tennessee, James Hervey Otey, declared that its purpose was to “furnish to this great Republic the truest men, the truest Christians, and the truest patriots.”

The University Archives and Special Collections is fortunate in possessing a rich record of the students who have enrolled since 1868. Founded to Make Men does not try to cover all aspects or moments of their history; the focus, for the most part, is on the College of Arts and Sciences and its students. Nor is it a history of the illustrious “men who made Sewanee.” From its inception, men and women excluded from this elite cohort have been fundamentally important makers of Sewanee: from the enslaved people who produced the wealth of the founders in the 1850s to the working people who have performed the heavy labor of building and maintaining the University ever since.

Instead, this exhibit follows a dynamic array of ideas about Sewanee’s cultivation of the manly character and quality of its students across the University’s history. The materials and artifacts gathered here explore the historical dimensions and enduring significance of the belief, as Guerry expressed it, that “Sewanee was founded to make men.”

Founded to Make Men takes what appears natural and obvious – men at Sewanee, men of Sewanee – and subjects it to a broader historical reflection on the ideals of manhood and masculinity that operated in the lives of students, teachers, and administrators and fundamentally shaped understandings of the University’s mission and destiny.

Approaching the record in this way links the history of the University and the “Sewanee Man” to the broader histories of higher education in the South and the U.S., and especially of intercollegiate athletics. This approach underscores how the ideal of the “Sewanee Man” incorporated beliefs about African Americans, women, sexual identities and practices, and class differences. In many cases, “Sewanee manhood” was used to defend the established hierarchies; in others, Sewanee students embraced the ideal to promote change. Founded to Make Men does not demonstrate an unchanging ideal of manliness. On the contrary, the history of Sewanee manhood has been dynamic, shifting and adjusting in response to larger changes in Sewanee and in American history broadly considered.

The importance of Sewanee manhood has been expressed most clearly and passionately during times of uncertainty or crisis, such as Chaplain Guerry’s paean in the grim years of the Depression. For that reason the exhibit examines critical moments in the University’s history when the ideal of the “Sewanee Man” played a crucial role in defining the University’s past and future and in resisting or promoting profound institutional change. It concludes with an open-ended questioning of the contemporary scene at Sewanee, asking if the ideas of the “Sewanee Man” and “Sewanee manhood” persist and remain relevant today. Such questions are especially important to consider in the context of a socially, culturally, and racially diversifying University, more than half of whose students identify as female.